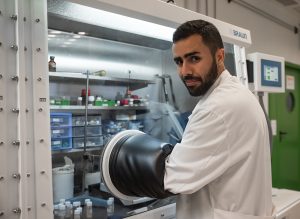 Práxedes Sánchez graduated in Chemistry from the Universidad de Sevilla (2014). During the 2012-2013 academic year, he did a stay at the Università di Pisa under the Erasmus program, where he could have a first contact with organometallic chemistry in the laboratory of Professors Guido Pampaloni and Fabio Marchetti completing his final year project. In 2015, he obtained a Master’s Degree in Advanced Studies in Chemistry at the Universidad de Sevilla, doing his master’s thesis with Professors Ernesto Carmona and Riccardo Peloso at the Instituto de Investigaciones Químicas (Universidad de Sevilla and CSIC) working  in the characterization and reactivity of platinum and palladium complexes with bulky phosphines. In the same year, he initiated his doctoral thesis under the supervision of Drs. Andrés Suárez and Nuria Rendón dedicated to the synthesis of new lutidine-derived non-symmetric ligands, their coordination to metal centers (iridium and ruthenium) and the application of the resulting complexes in catalytic reactions of industrial and environmental interests. In 2017, he spent three months at the Institut für Angewandte Synthesechemie of the Technische Universität Wien in the group of Prof. Karl Kirchner, where he carried out studies involving the coordination of pincer ligands to iron and manganese complexes. Práxedes has successfully defensed his PhD thesis in July 2019, and he has joined to the Prokopchuk’s research group at Rutgers University (New Jersey, United States)